The spectrum of social concern as far as we can tell so far: 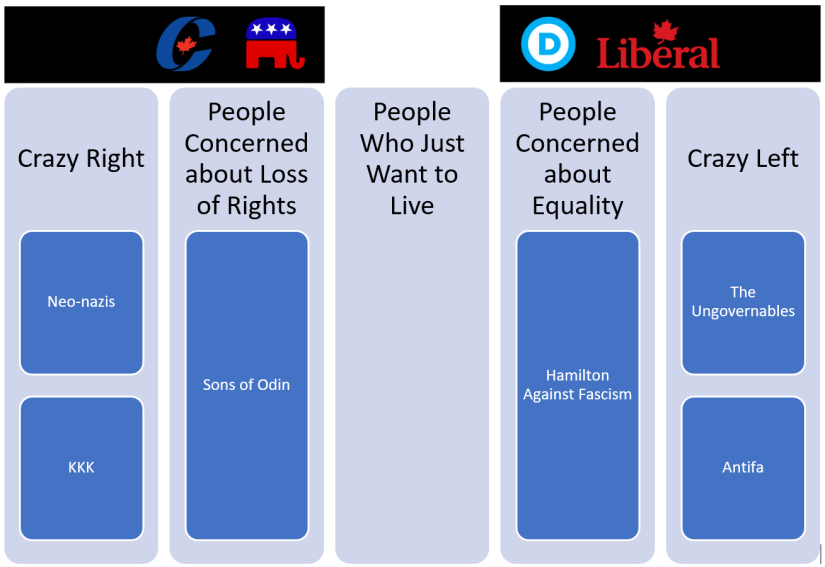 You may notice that I have placed some fairly extreme folks underneath both wings. I could add more to the “Crazy Left” and “Crazy Right”, but I think these will do for now.

Other observations could be employed to this graph. Quite a few folks of Hamilton, Ontario might try to link Sons of Odin to other less moderate groups (Craggs), but this is what I would like to look at: how some people may try to cut away the moral foundation/social support from some groups due to supposed group correlation, yet they themselves are very disinterested in admitting to their own unfortunate relationships to equally immoderate elements.

One of the first things that must be asked about any activist movement is the goal of said movement and the tactics and strategies which are used in order to achieve the goal. By this the activist movement is evaluated and deemed good/bad, positive/negative, or constructive/destructive.

For example, the idea of tearing down systemic inequality in the capitalist system seems like a good thing as the gap between rich and poor widen, and as the size of wealth becomes more concentrated among a smaller group of citizens.

Yet, local groups protesting “gentrification” become questionable when linked to violence. This sullies the water, so to speak, and creates a healthy dialogue about what entails as constructive versus destructive activism.

I believe that positive, informative, reasoned protest will create and bring debate, discussion, and critique to the issues that require attention. Yet, at the same time, this debate will not become violent or anarchical in form because the average Joe on the street needs to hear and speak, not be beaten into submission.

When political leaders suggest that the “time for civility is over”, however, the mob becomes emboldened, and attempts may be made to persuade through less politic, pro-social, or sensible means. Perhaps, persuasion will turn to violence.

What is to be done with the negative, destructive elements of one’s own community or groups? This is a knotty, yet important, question in a time where, more than ever, integrity and brand names are seriously considered. The saying goes, “a spoiled apple ruins the whole barrel”; and for thousands of years, this has been true for most people when making judgement calls on particular groups.

For example, historically, Christians, regardless of whether they are Protestant, Catholic, or Orthodox, have had to handle accusations surrounding Galileo or the Crusades. Today, Muslims are often lumped in with the “radicalized minority” (which may be a myth).

Politically speaking, since the World Wars, Germans have had to fight against negative stereotyping. In culture studies, despite individual, personal family histories that can be traced back to non-violent behavior, white people are called to account for colonialism and imperialism.

How is one to progress?

I would recommend that there are only a few things that one can do, considering the reality of stereotyping. There are a few steps to follow:

First, admit there to the reality of destructive behavior fomenting on the fringes (or under the surface) of your group. It is difficult to admit to yourself that the people with whom you are allied aren’t perfect – but it must be done!

Second, “disavow” the negative elements of the grouping in which you find yourself. Speak out about the destructive behavior of your group, even if that makes you unpopular.

Third, correct group behavior appropriately – following the legal rules of the public spaces you are within, shaming/correcting misbehaving members, modelling proper behavior, and teaching positive ways to act within that group. This will take time, but the long-term effects will result in growing stability.

Fourth, distance oneself from violent, illegal, or impolite parts of the group. Do not allow yourself to be seen physically or verbally supporting social malcontents. If you do make contact with the less than desireable elements of your grouping/community, let it be known it is intended as a way to reach out and draw back radicalizing members.

Fifthly, do not attempt to eradicate the presence of negative factors in your group from history; it can be a learning lesson for the generations to come. To purify the image of a group for posterity does not allow for lessons to be learned and provides an unreal picture of how life actually progresses. Furthermore, it does not provide a way for people to learn how to properly dissent within shared public spaces.

These five steps are by no means easy or simple to follow because as social creatures, we are reluctant to go against the flow. It is much easier to believe that everyone marching at your side is there for the right reasons, but that is not always the case! If we are not able to maintain objectivity about the various groups to which we attach ourselves, we are more likely to be swept away in a mob mentality or get caught up in group think.

With mob mentality or group think possessing the community, it becomes easier for the goals of the community to derail and, on some occasions, cause serious societal harm to others around.

Looking at the recent news about the rise of Antifa and the supposed threat of the Alt-Right looming (although I’ve yet to see serious Alt-right shenanigans on par with the American Antifa), I have a feeling that more and more young people, who are gifted with energy if not forethought, may become uncritical pawns in the ideological games of political and economical forces.

Quite a few young people can and do rely on innate senses of what is politic or impolitic, but there are a few universities which are attempting to overthrow “current hierarchicies” by fomenting hotbeds of revolutions on campus. As a result of uncorrected social behavior, some university attendance has dropped, such as Evergreen College.

Even worse, adults, as they band around social media buzzwords like #metoo and the Woman’s March, may also become swallowed up in a community that has ties to less than desire-able groups. Take, for example, the Woman’s March, currently under fire for anti-Semitic ties, resulting in the founder also having to speak up. Unfortunately for any past, present, or future supporter of the Woman’s March, history teaches us that simply dealing with the misdemeanours of the group cannot eradicate the stain from history (ie. Protestants getting called out for the Crusades). Therefore, managing the name brand of the Woman’s March going forward becomes double important. We shall see if anti-Semitism will continue onward in the lives of the March’s leaders.

In short, although I am all for independent thought and action, and although I believe that the individual and their beliefs are their own separate from the movement or community, I am also aware that responsibilities to larger groups and identities regularly impinge on everyday life. Perhaps it should be possible for a leader of the Woman’s March to also hold anti-Semitic thoughts; perhaps we should not judge the potential morality of a person by the colour of their skin. Unfortunately, as a safety mechanism, most humans rely on memory and experience to help make judgement calls, social or political… and it only takes one negative memory or experience to sour a person’s opinion about a movement or community. For better or for worse, we represent groups greater than ourselves and thus, perhaps, should take them into account accordingly.

[SPEC] Think it through, Hamilton Police chief warns ahead of Locke Street showdown

[CBC] “Sons of Odin doing park and street patrols – a presence not welcomed by everyone.”

[GUARDIAN] What happens when a #MeToo victim like Asia Argento is the accused?

[BBC] Seven things you need to know about Antifa

[VOX] Antifa clashes with police and journalists in Charlottesville and DC

Since the age of seven, I've enjoyed writing, and as time has passed on, this love has grown to envelope a variety of genres and interests. Hopefully, you will find this blog interesting (and maybe a challenge) as you explore the world I am discovering. The blog "A Heart Is A Heavy Burden" is written by my sister. View all posts by dappled-things

This site uses Akismet to reduce spam. Learn how your comment data is processed.

If you are looking for a writer - for a story, comic book/novel, or script, feel free to contact me. As someone who hopes to grow professionally as a writer, I will be upfront about my limitations and interests because I am committed to a solid product readers will enjoy.